This year was the 21st Tanzania international model of United Nations Youth participation in innovation and creativity for the sustainable future. It is the biggest youth-led platform in Tanzania that brings together youth from across the globe to discuss and come up with solutions to the issues that touch youth lives in our society. All discussions during TIMUN are conducted in accordance to the United Nations Rules and Procedures. My colleague at university had previously attended the conference and broadened my horizons by informing me of the event. Over 800 applicants initially applied to attend with around 240 being successful. Four of those successful applicants were from the United Kingdom, one of them was mine. 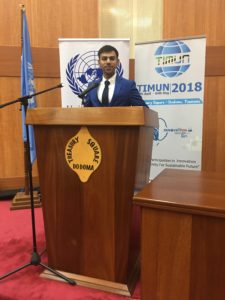 The experience has been phenomenal. The train journey from Leeds to Manchester airport was around an hour, with a 13 hour in-direct flight to Dar es Salaam. Landing at around 2:15am we were instructed to wait for an individual to collect us and take us to the bus station. After arriving at the bus station the travel to Dodoma started at 8am and took around 7 hours. Being in a new country, with a different culture and normative values I found this to be quite a culture shock. Moreover, being in a procedural court learning the rules of the general assembly on Monday after this incredibly tiring journey resulted in a complete lack of concentration.

The experience of meeting people from around the world has enlightened my appreciation for cultural values which are not normative to the United Kingdom and western society. The opportunity to have conversations about the crises in South Sudan as well as political struggles such as the Somalian establishment, significantly empowered delegates in the conference to make a change.

As we are the future of international diplomacy it is crucial the youth of today have a platform allowing a voice for tomorrow.

The striking thing that remains is the number of like-minded people who remain interested in international relations. I feel incredibly humbled and proud to have been accepted to this opportunity and will certainly implement the knowledge gained in local government policies relating to mental health and primary care. These opportunities are coming thick and fast, that being said at a young age it is imperative that infrastructure is provided to those younger than me to access similar opportunities from significantly challenged demographic backgrounds.

I have learned that this generation are all natural-born leaders.

We can nurture young people into being progressive humans which leads to creative change. Collaborations between young people to create change allow for alternative realities and ultimately changing lives.
Having had my first international youth experience I feel that the world is becoming an incredibly connected place. Social media is fragmenting society to buy our attention, resulting in increases of dopamine when receiving likes. I have learned that social media is not required to excel. Therefore I decided to delete social media and all of my future activism work will be done through the appropriate channels.
My advice to another young person looking to get involved with a similar project?

If you want to fundraise for a cause, do it. If you want to go abroad for a youth conference don’t let anything hold you back. When we were in Tanzania all participants were in the same boat, we had a week to discuss world issues and make new partnerships. It was a hurdle to communicate with people from the other side of the world, however, the experience I will cherish forever. You are never too old to learn, and never too young to have your voice heard.

Thank you to Amen for writing this blog post about his experience. We are looking forward to him joining us on the first ever Drivers for Change journey!